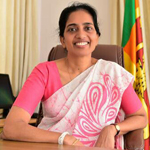 Ms Himalee Arunatilaka is a career diplomat having joined the Sri Lanka Foreign Service in July 1998.

Immediately prior to her appointment as Ambassador to Nepal, she headed the Africa Affairs

Division and the International Security & Counter-Terrorism Division of the Sri Lankan Foreign Ministry as Director-General.

Her overseas assignments include Canberra, where she has served as the Deputy High Commissioner with concurrent accreditation to New Zealand, Fiji, Papua New Guinea, Solomon Islands, Vanuatu and Samoa (August 2015-December 2018), Sri Lanka Embassy in Paris, as Minister/Head of Chancery with concurrent accreditation to Spain and Portugal (2006- 2009) and the Permanent Mission of Sri Lanka to the UN in Geneva as First Secretary (2003-2006).

Her previous assignments in the Foreign Ministry include the Political Affairs/Europe, CIS and Americas Division, where she was the Acting Director General from 2010 to 2014, and during which time Sri Lanka hosted the Commonwealth Heads of Government Meeting, the Counter Terrorism Unit and the Public Communications Division.

She has represented Sri Lanka as a member of Government delegations to the Commonwealth Heads of Government Meeting in Colombo (2013), United Nations General Assembly in New York (2012 and 2013), St Petersburg International Economic Forum (2011), and also accompanied the Government Delegation for Talks with the LTTE on the

Prior to joining the Foreign Service Ms Arunatilaka worked with the Women and Media Collective and the Sri Lanka Women’s NGO Forum for Beijing ’95, in Colombo.

She holds a Master of Arts Degree from the Middlebury College-School in France, and a Bachelor of Arts Degree (with Major in French) from the University of the South, (Sewanee) in Tennessee, USA.